The Women's Foundation of Nepal

The Women’s Foundation of Nepal (WFN) aims to relieve the isolation, distress, poverty, and torture experienced by women and children in Nepal, and to establish a discrimination-free society.

WFN works to educate women about their rights, to promote gender sensitization and equality, and toward the elimination of gender-biased laws, rules, regulations, and for equal participation of women at all levels of government and decision-making. 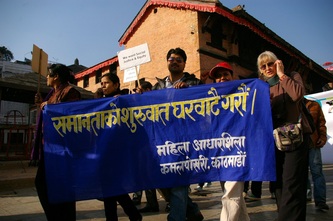 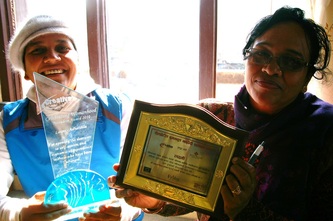 WFN President Renu Sharma and Secretary General Kamala Upreti with the Navadevi 'Laxmi' Award 2010 "The Women’s Foundation of Nepal, as an institution, continues to help women through its multiple activities, including increasing their awareness concerning legal rights, sheltering victims of violence, and equipping women with life skills" said the Kathmandu Post

Case Studies  (names have been changed)

Sona is a widow from the eastern region of Nepal. With four children, no land, no job and no education, both she and her husband (before his death) worked hard to earn enough money to feed the children. When her husband died unexpectedly in an accident, Sona needed to support the family by herself. She sent one daughter out to work and tried to feed the other two children.  Her eldest son was nineteen and was living separately from the family. She could not go to work and was dependent on the grace of her fellow villagers.

While in this vulnerable situation, the villagers began to accuse her of being a witch. If anything went amiss in the village, she was held responsible. When village children had diarrhoea or fever, or if any person or animal in the village got sick, the villagers came and tortured her.

One day, more than fifty people come to her home and beat her because a baby in the village had died. They brought the dead infant's body to her and told her to cut it up and eat it.  They grabbed her and tied her to the dead child. Not only was this experience intensely traumatic for Sona, her two children were also watching and crying.

When the Women's Foundation heard of Sona’s situation, they went to the village and offered her protection. WFN brought the case to the police office and thirty people from the village were arrested within two days on charges of assault; they also provided short term support to Sona and her daughters. Following this incident, legal education classes were run by WFN during which many similar stories were shared.

Sabina comes from a region in eastern Nepal. She has three daughters and comes from a poor background. When Sabina gave birth to her third daughter, it became incredibly difficult for her and her husband to earn enough money to feed the family. Sabina's husband became increasingly violent; he hit Sabina repeatedly. Several times when the children cried he threw them out of the house.

Sabina became pregnant with a fourth child. When she was seven months into the pregnancy, her husband accused her of adultery, insisting that the child was not his.  At night, he hit her violently, intending to kill the unborn child. When she was bleeding, he dragged Sabina out of the house and stripped her naked.  He tied her to a tree in the corn field on a cold winter night, and tied a cloth around her mouth so she could not call for help.

The next morning, a man was walking near the place and he saw her. He called the villagers and they untied Sabina. They informed the Women's Foundation's local office. The local office rescued the three girls and their mother. The case was brought to the police and then to court.

Sabina’s husband was not punished for torturing his wife as there is no law against domestic violence.  She was, however, granted a divorce which meant she could live independently and raise her children on her own terms. After the divorce came through, she came to the WFN office to express her happiness through dance, "I am reborn!” she said, “I can dance; no one can control me! I can dance, talk, walk and express my feelings!"

Jamuna (name changed) is a nine-year-old girl from the Baitadi district.  Her mother died when she was very little. Her father remarried and had children with his second wife.   A compulsive gambler, Jamuna’s father gambled his daughter and lost. The man who won her took her to his home and arranged to marry her to his thirty-year-old son who suffered from leprosy.

When local people learned of Jamuna’s plight, they informed WFN. With the support of the District Child welfare committee, the Women's Development office, and local NGOs, WFN was able to rescue her from her prospective husband and bring her to the shelter in Kathmandu.  At the shelter, Jamuna received three months education and was admitted to school.  Presently, she is studying at secondary school.

WFN brought the case to court. Nepal has no law to punish the man for gambling his daughter, but the marriage was cancelled.

In Nepal, women and girls are considered to be the property of males – first the father, then the husband. With the support of WFN, Jamuna was saved from a disastrous situation as well as offered the opportunity to be educated.